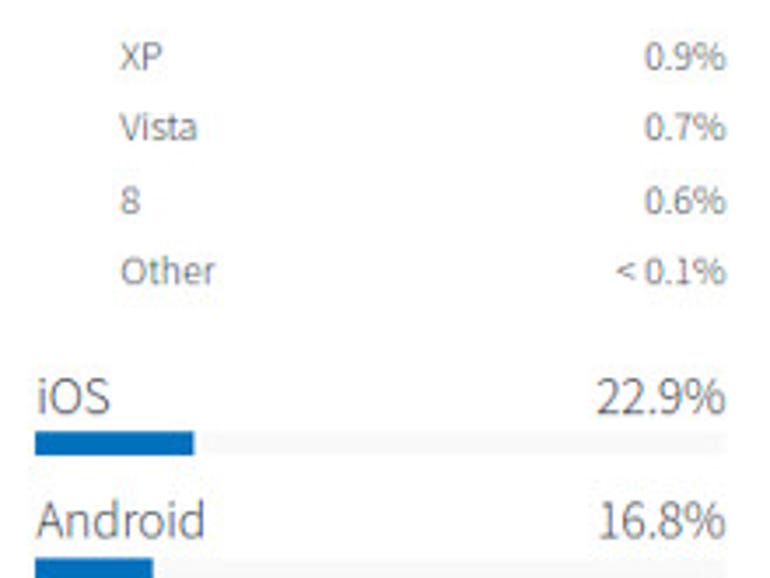 Windows is still the most popular operating system for end users, but it is now used by less than half of visitors to federal government websites.

The Federal Digital Analysis Program (DAP) reports that although Windows is the most popular operating system for end users, it has fallen below 50% to 49.2%. This is based on 2.17 billion visits in the past 90 days to over 400 executive branch government domains on approximately 5,000 websites in total, including all cabinet departments.

That’s a hell of a drop. According to DAP, Windows accounted for 58.4% of all visitors to government websites in March 2015.

Looking closer, you can see that the loss of Windows did not happen because users are switching to other desktop operating systems. MacOS still comes in at No. 2, with 9.2%. All other operating systems, with Chrome OS leading at 1.1%, only account for 2%.

Certainly, other sites show that desktop Linux is gaining serious market share. NetMarketShare reports that Linux has held over 2% of the market since June 2016, while W3counter reports that Linux accounted for 3.80% of desktops in December 2016. However, since no sites broke Chrome OS, I suspect that the vast majority of those gains go to the credit of Chrome OS rather than traditional Linux desktops.

The real reason Windows has fallen below 50% is because smartphones and tablets keep growing while the desktop keeps shrinking. The PC still represents 59% of the total number of visitors to the government website, but smartphones – at 35.1% – continue to grow.

As Ranjit Atwal, Research Director at Gartner, recently put it, “The PC market has been on a downward trend for five years and we’ve lost about 25% of the market during that time. It’s starting to bottom out and we expect that as businesses, rather than consumers, start refreshing their PCs.”

So, it shouldn’t be too surprising that the #2 end-user operating system is Apple iOS, with 22.9%. High price and all, we love our decade-old iPhones.

Breaking down Windows, you’ll find that Windows 7 is still on top. StatCounter may claim that Windows 10 overtook Windows 7 in December 2016, but neither NetMarketShare nor DAP agrees.

NetMarketShare and StatCounter are both popular for their operating system and web browser metrics, but their numbers are massaged. The two companies use different methodologies. Their results often vary for reasons that seem to have no rhyme or reason. DAP figures, while US-centric, are vendor-neutral and based solely on user data.

What all of this means is that while Windows is still the top dog in the desktop operating system, the desktop has clearly fallen to second place for end users. We have become, like it or not, mobile users first and desktop users second.

15 games with their own simulated operating systems