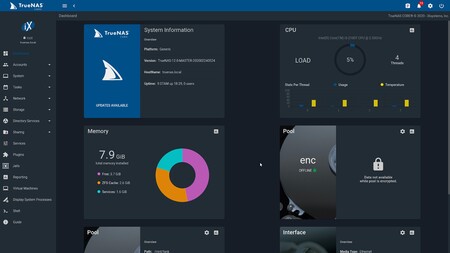 Learn more about NAS servers or “network storage devices”, a specific class of computers that allow us to do this Setting up our personal cloud Even hosting backups, medical center, or torrent download client.

However, what sets it apart is that whether we are using a commercial device or configuring our NAS at home to reuse an old computer, The operating systems and / or distributions we will be using are not the same as those we are used to For use in personal computers.

So we have compiled Four most used NAS operating systems (two in the “open source” category, and two more in the commercial solutions category), so that we can start to get to know them better.

TRONAS (Formerly known as FreeNASIt is an open source operating system based on FreeBSD. Apart from the commercial NAS, it is the most widely used operating system in the field, thanks to its veteran capacity and versatility (it is perfectly usable in the professional field, for example).

It stands out when it comes to making it easy to share files with other systems, such as Windows (thanks to its support for SMB / CIFS), Unix (NFS) and Apple (AFP); Integration with cloud storage platforms is supported as standard for Create remote “snapshots” (backup copies) of your files.

It is the only open source operating system that offers ZFS based volume encryption, but if you are going to use this filesystem, try to have a good amount of RAM,

OpenMediaVault ES Increasing the value of NAS operating systems. Unlike the previous one, it is based on GNU / Linux (especially Debian), so it may be familiar to many users … not to mention the advantages Being able to count on a large repertoire of software available for such distribution.

Another difference with TrueNAS is that OpenMediaVault Seeks to focus on home and small business, therefore less greedy in material: a lot, even in Installable on Raspberry Pi mini PC.

This system, with a modular approach (with many official and third-party add-ons), has a lot of documentation and community support.

DSM (short for DiskStation Manager) is the operating system of the industry-leading Synology NAS brand – installed on more than eight million computers. We have already covered the potential of this system a month ago as an alternative to google images, using a beta version of DSM 7, the final version of which was released this week.

likely, DSM’s biggest attraction is its vast ecosystem of official apps, both those accessible from the â€œstoreâ€ of the NAS itself and those available in the mobile version, which will allow us to access various services on the NAS from the smartphone.

Interesting fact: There is a bootloader, called Xpenology, which It will allow us to load DSM on x86 machines, even if they are not made by Synology (Of course, it does not have the support of this brand, only the user community).

The second most used commercial operating system On NAS devices, QTS is Linux-based, which QNAP uses on its own devices. like a rival, It also has a whole ecosystem of applications (On your platform and on mobile).

And like Synology too, it released a version this week (QTS 5.0, based on Linux 5.10 LTS kernel), although in your case it is still in beta.

Like the DSM, its user interface, although based on HTML, Seeks to simulate a typical office environment, with icons, menus and a taskbar.