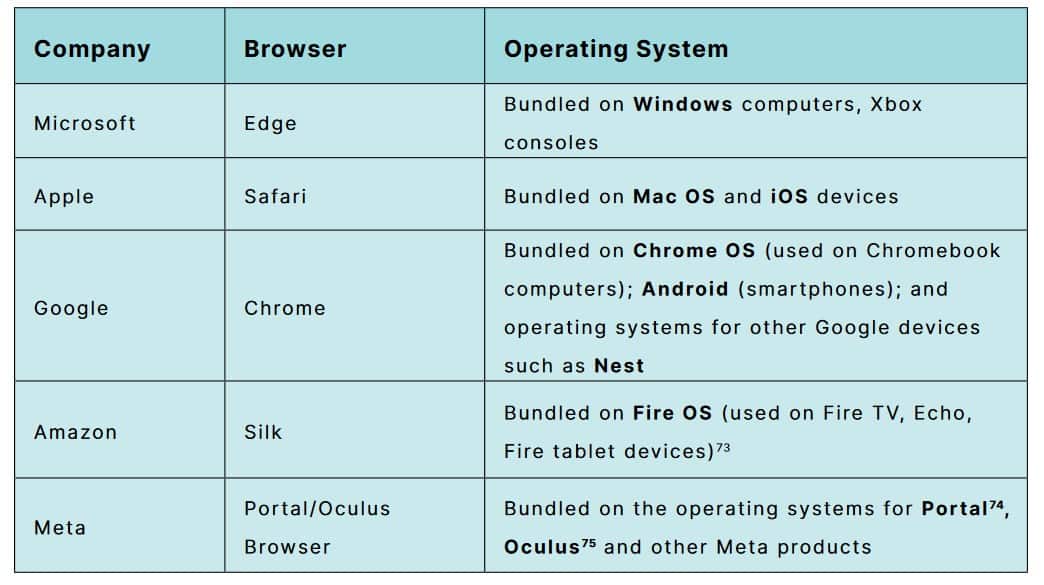 Andy Prough commented >> Firefox has the GNU/Linux distro market mostly to itself, as it comes pre-installed with almost every distro. Google could actually complain about it the same way if it wanted to.

Why would they complain?

Chrome OS, is a Linux-based operating system designed by Google. ChromeOS is based on the Linux kernel. Without the Linux kernel, it would be nothing. Google Chrome is the default browser on ChromeOS. ChromeOS could very well be more popular than all mainstream Linux distros combined, as Chromebooks are becoming very popular and ChromeOS is very popular according to statistics.

ChromeOS however is inferior to some of the best Linux based operating systems such as Fedora, Arch, Ubuntu, Mint, Debian, Gentoo. No reason to use crappy Google software or their proprietary browser when superior options exist.

The most popular FOSS browser according to statistics is Firefox. It makes perfect sense that it is installed by default on the best Linux-based operating systems.

Competing Chromium-based browsers use technology designed/created by Google, the chrome codebase, which gives this browser codebase a kind of monopoly, where Google can dictate what the web standards should be.

When using a FOSS distro, it is recommended to use Firefox, as it is the only FOSS browser with its own unique engine (Gecko) that contains excellent privacy/security/customization and having something like more 10% of its code base in great new features. technology such as the RUST secure programming language.

Unlike Chromium-based browsers, around 10% of Firefox uses Rust, a more secure programming language specifically designed to be memory safe.

Some things to think about from the article below.

About 70% of all serious security bugs in Chrome’s codebase are memory management and security bugs.
Today, Rust is considered one of the safest programming languages ​​and an ideal replacement for C and C++, mainly due to early efforts by Mozilla.
Google engineers say their approach to sandboxing Chrome’s components has achieved its maximum benefit when considering performance, and the company must now turn to new approaches.
https://www.zdnet.com/article/chrome-70-of-all-security-bugs-are-memory-safety-issues/

Just read all the tech news articles describing all the security issues/fixes that Chrome or Chromium browsers have against Firefox. The supposedly superior site isolation and sandboxing it has compared to Firefox doesn’t mean much, when it’s Chrome that has far more security issues according to statistics.

Google, the ad tech company, is really the ultimate guardian of what the Chromium codebase can do, they are known to have the most commitments in the Chromium project. It’s no surprise that chromium-based browsers don’t have as good privacy/customization features as Firefox, since the chromium codebase is MOSTLY designed for a proprietary browser. It’s not a really smart argument to suggest that the chrome codebase would have better security/privacy than Gecko/Rust, when one codebase is primarily developed for a proprietary browser (Chrome) and the other code has was developed for a FOSS browser.

Chromium based browsers are inadequate, lacking and inferior to Firefox. An example why? Chromium-codebase is mainly used for the development of a proprietary browser (Chrome). No security expert worth their salt would recommend proprietary software over FOSS. Another example? Mozilla invented RUST (Show how talented they are) and Firefox on desktop is very customizable.

Firefox is not perfect, but even more perfect than other browsers.

Karl RESPONDS to JonSnow >> You sound like Iron Heart

I also think it’s odd that some Anti-Firefox comments sometimes sound a lot like what Iron Heart would say, such as praising, defending, or supporting a narrative of his obsessive negativity against Firefox in the Ghacks comments section in many numerous browser news articles. . Never forget that people say they create UBO filters especially for him, to block his comments from view lol.

I think it sounds like something Iron Heart would write.

Boo Hoo commented >> I’m tech savvy, know exactly how everything about my browser of choice and search on my operating system. I still won’t choose Firefox. Because it’s crap.

Iron Heart commented >> There is a clearly described setting in all operating systems to change the default browser, and people obviously aren’t too stupid to use it either, otherwise Chrome wouldn’t have replaced the Windows and macOS default for most people!
IronHeart commented >> people have to go to settings once to change the default, which they’re supposedly too dumb to do, when they’re clearly capable of doing it in real life. Ridiculous.

Yash commented >> I’m sorry for your lack of knowledge on some topics and yet I pretend you know everything. So next time, better do some research. By the way, real research and not some other madainwhatever the nonsense.

Iron Heart commented >> The default browser just means any kind of external link opens in it, not that it literally becomes part of the system